Amman Rashid is the man behind the beautifully crafted jewellery line called ‘Aadi’. 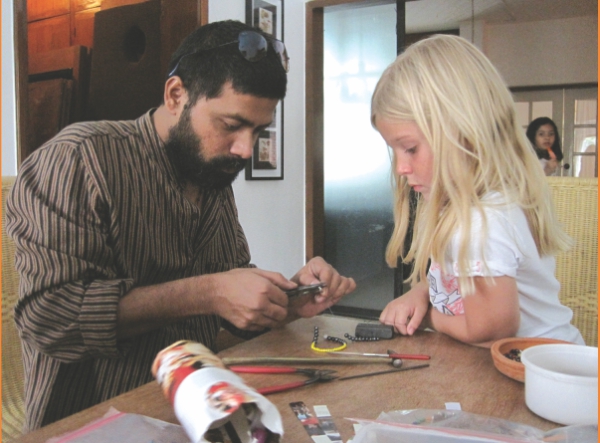 A management student by education, Rashid is a designer at heart who thinks out of the box and his creations are out of a box, literally.
His passion for making jewellery grew out of his involvements with the theatre group Prachyanat, when he used to design the props. While experimenting with various materials, mostly eco-friendly, natural and recycled things lead him to recognising his talents for designing off-beat accessories around 2001.Since then, Rashid and Aadi have come a long way. 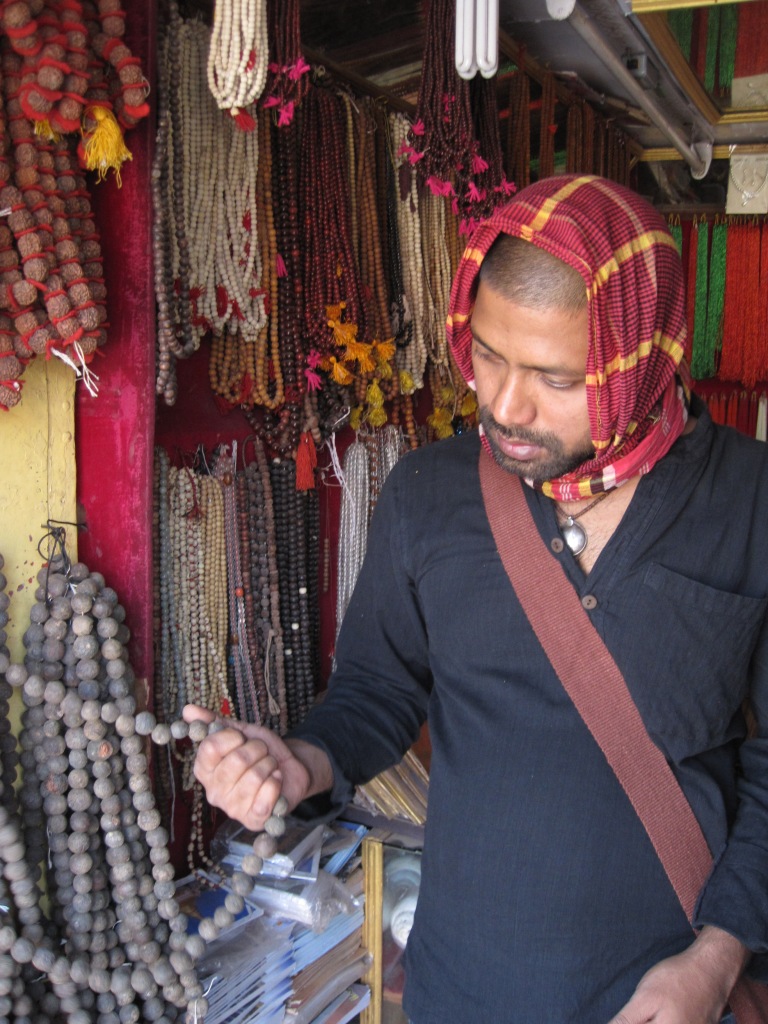 His collection resulted in his venture to Abhushan, the international jewellery summit that is organised by the World Crafts Council in association with The Development Commissioner (Handicrafts) Ministry of Textiles of the Government of India. 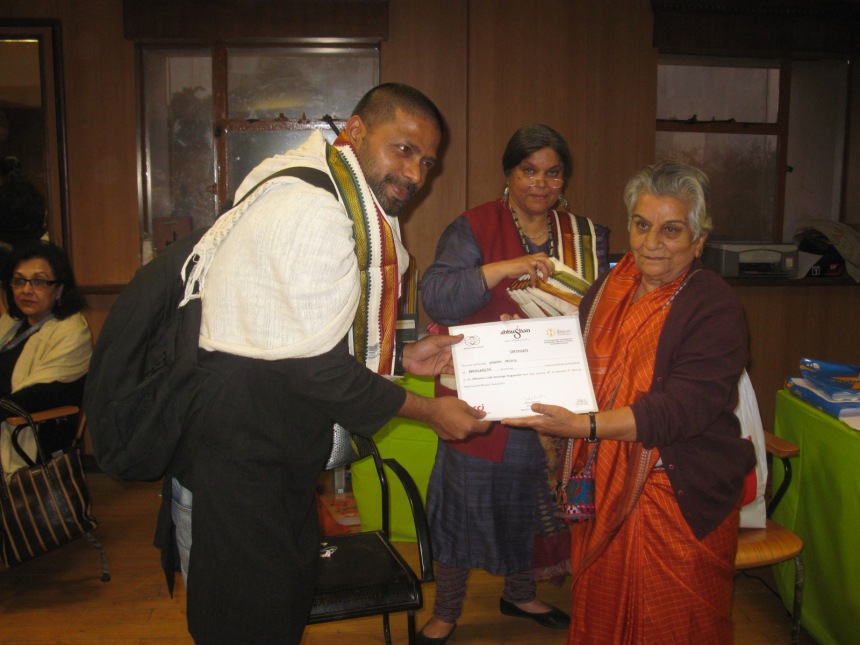 Rashid attended the week long event that took place in Delhi, sponsored by Brac Bank after the keen eyed Ruby Ghuznavi approached Rashid about attending the summit for his reputation of working with ‘seed to silver and grass to gold’.

Speaking of his experience in Delhi, Rashid states,
“The workshop was an experience that all artists dream of. For seven days, I was with people who share the same interests, who understand my art. During the time we were there, most artists, I like to call them artists, stayed in a hotel but I took shelter in an ashram. It wasn’t because of the cost but because I thought it would be a good idea. And it was!” he exclaims and continues, “At the ashram I interacted with the wise and I was inspired. The workshop in itself was great of course. I learned new techniques that I plan to use.”

This was the first time when I met Amman in India. He couldn’t speak/understand Hindi, so I took my colleague along with me who speak bengali. He is down to earth and soft spoken person. His jewelery from old coins in an eye -catcher. I personally LOVE IT! 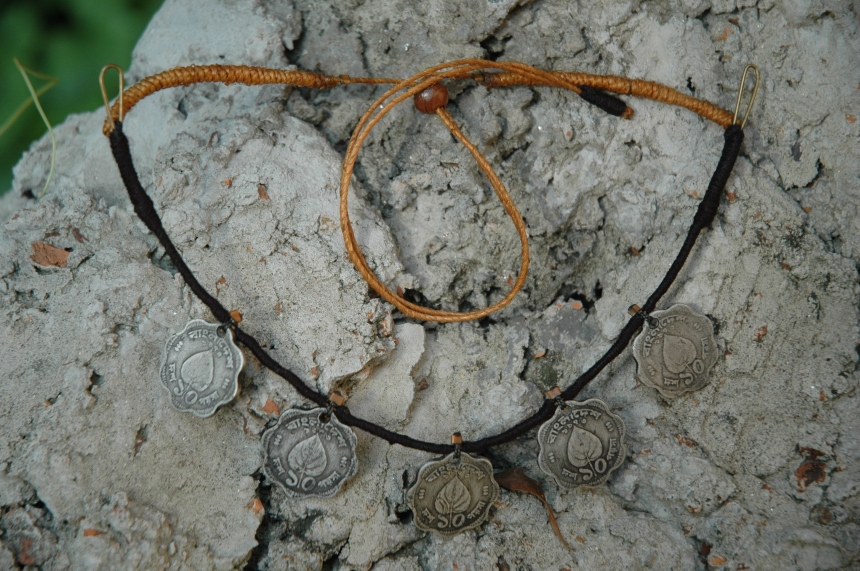 As a designer of jewellery, Rashid works solely with recyclable and reusable materials and the metals he prefers to use is silver and copper. All his designs in some way give an insight into his role as an artist, and they are his way of expressing himself.
The jewellery draws upon influences and uses motifs reminiscent of varied ethnicity and cultures that are African and Asian in origin.
When asked why these cultural influences are evident in his work, he commented, “When I began creating pieces for Aadi, I was always looking at books and checking out the internet, studying different cultures and the way people wear jewellery.
To put it simply, it was my personal interest in these cultures that can be seen reflected in my work.” 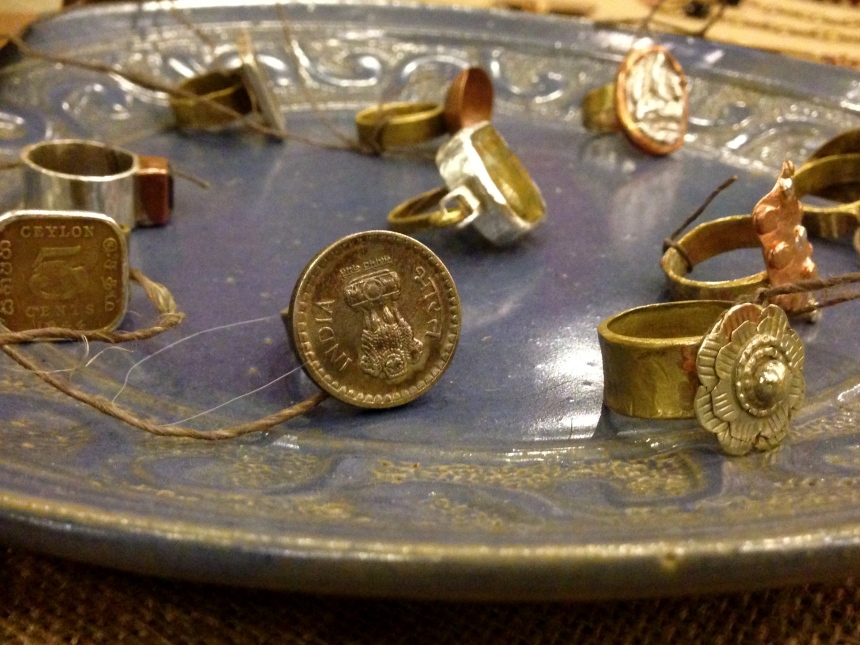 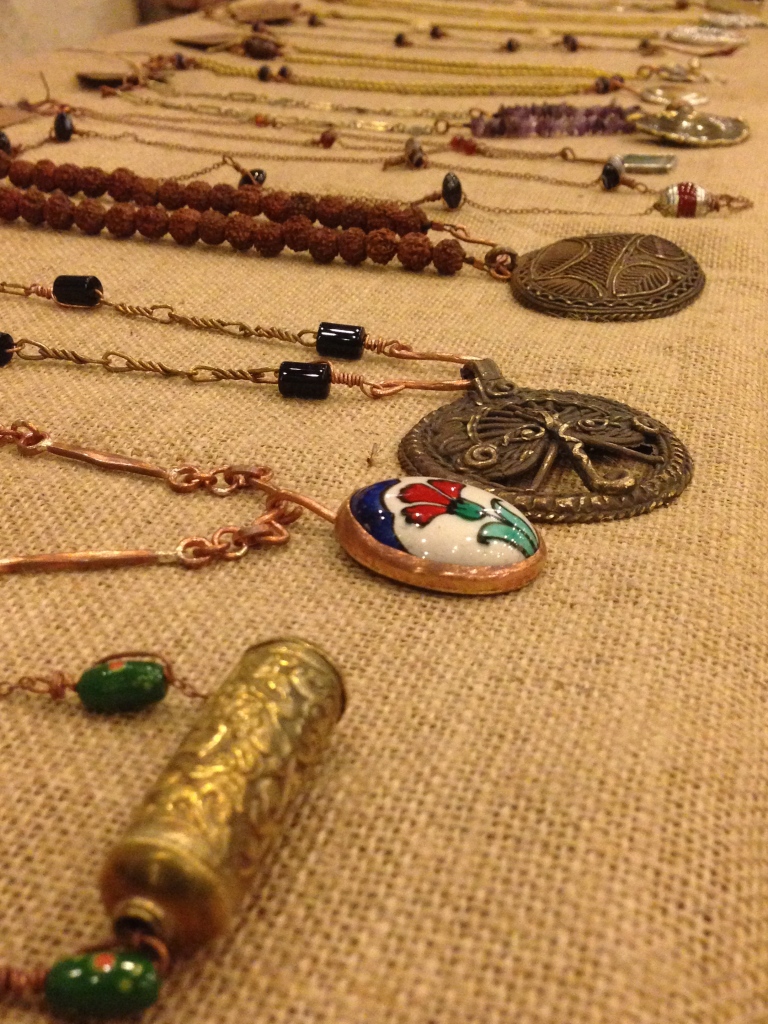 Pursuing his dream has been a challenge in Bangladesh. In terms of aesthetics it has meant that he has had to redefine concepts of what is beautiful and what jewellery should look like.
His designs are not glitzy or uber-glam, and for Rashid to establish himself and his craft has been a struggle, even though those with an eye are quick to recognize his potential as an artist, craftsman and his use of eco-friendly materials means his designs have the potential for greater commercial success in an international market. 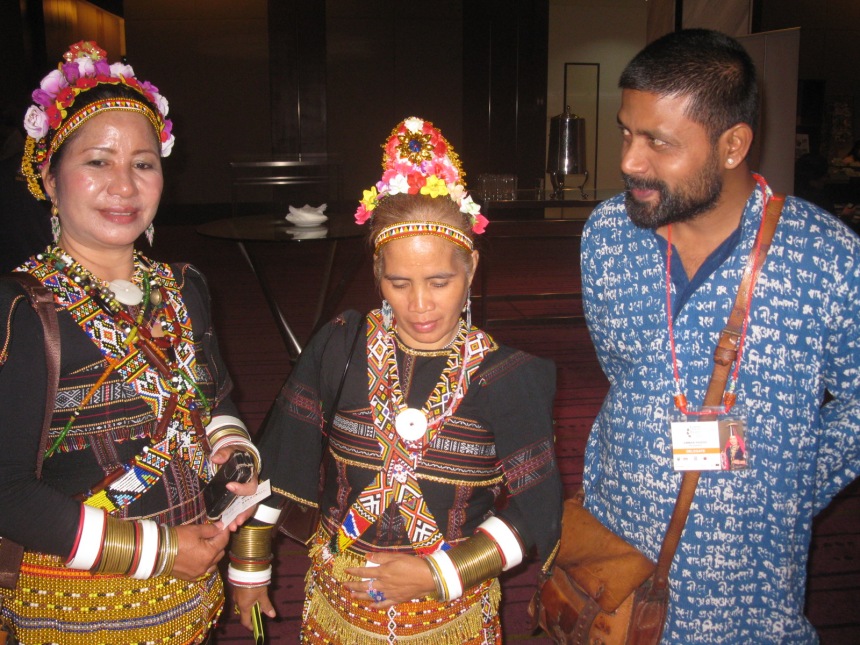 One such person is art connoisseur Nevine Sultana, who now works as Aadi’s PR rep. 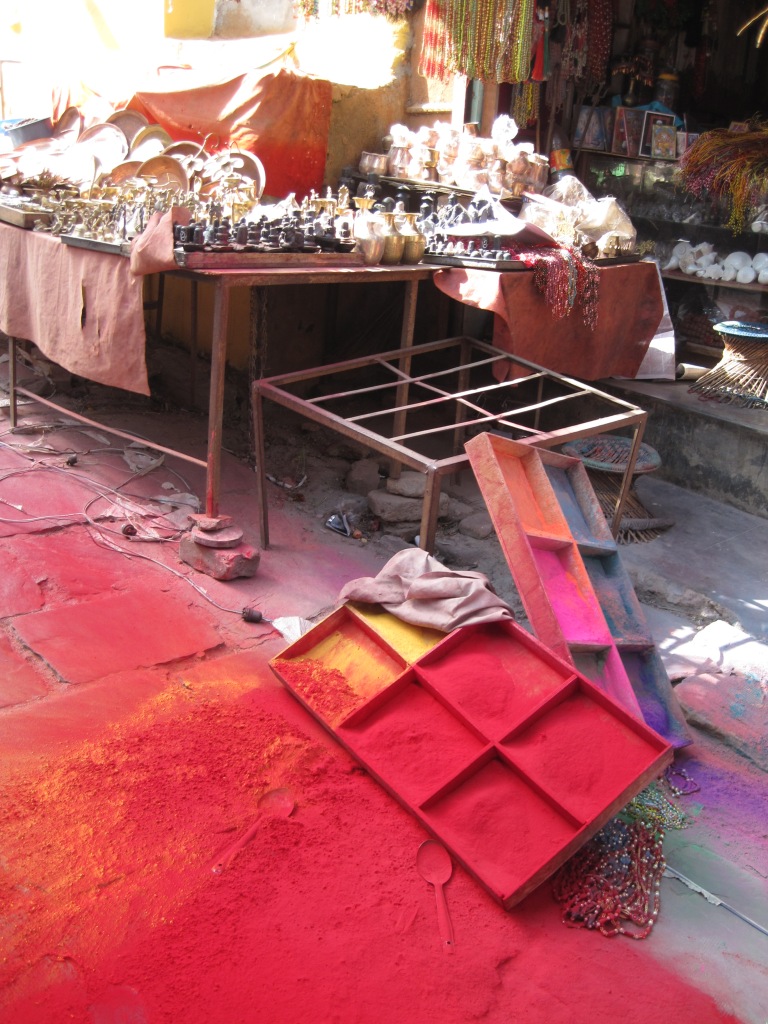 She is a good friend of mine as well. It was because of her I came across work of Amman. She is an inspiration for me. One of the best person I came across in my life. We chat on emails and spend time together whenever she comes down to New Delhi 🙂 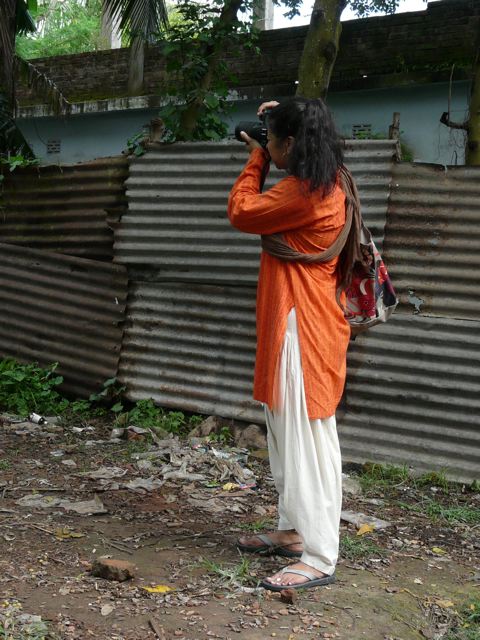 She shared her opinion, “Over the years, slowly we have drawn together a circle of people who love the work. Fortunately or unfortunately most of them are expatriates. Those who are from Bangladesh often question the value of the pieces. Every single piece is hand made and a lot of effort goes behind each one. We use rare materials so the jewellery is priced accordingly for the craftsmanship.” 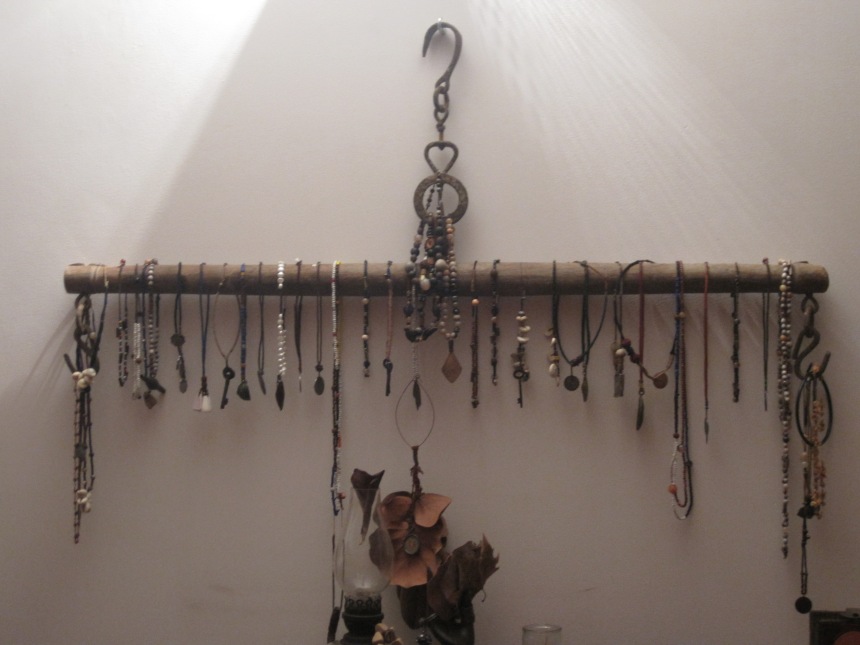 Over the last eleven years, since Aadi’s journey began, Rashid was experimenting to begin with but now he is slowly consolidating his ideas and designs, which are always different but there is also some underlying pattern that identifies it as an Aadi piece.

An artist by nature, for Rashid everything is art, whether it is conventional or unconventional, and he sees Aadi going places.

Below is his card given to me by Nevine 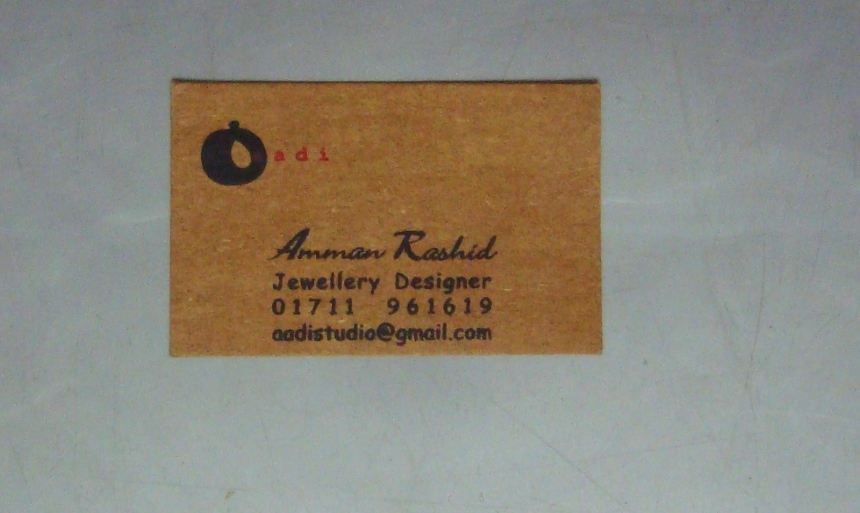 5 replies to Aadi ; From across border