I have spent my childhood in Himachal Pradesh
and I can very much relate to the beauty of this state.

Chamba is a town situated on a mountain ledge overlooking the River Ravi.
It was established in the 10th century when Raja Sahil Varman relocated his capital
from the neighbouring Bharmour region,
now the homeland of the semi-nomadic sheep herding Gaddis.

The Chamba Rumals are made of fine cotton or muslin
and are embroidered with silk and sometimes with silver and silver gilt wire.
It is presumed that the subjects were drawn in outline by the women themselves.
However, certain unfinished rumais show such sophistication of drawing that it seems
that they were drawn by the painters, usually in earth-red colour.

While the painter was employed by his patron, the raja and his nobles,
to record important happenings in the court, to paint mythological subjects,
to depict the various musical modes (the Ragamala),
the seasons (Baramasa) and to show lovers in various stages of the agony
and ecstasy of love (nayika series),
the ladies of the court produced the sama motifs with their needles and
with an equal amount of skill.

These murals, the composite work of many artists, were,
in effect miniature paintings done on walls.
The paintings were laid out in small panels usually 60 cm x 75 cm and
were surrounded by floral borders.
The ladies reproduced them in their embroidery down to the floral borders.

The rumals, handkerchiefs, were used on all festive occasions
as a symbol of goodwill and affection.
They were presented as gifts and were used for wrapping gifts exchanged at weddings.

They were also used for covering dishes full of food.
A miniature painting of the 18th century in the Lucknow Museum shows a lady carrying a dish covered with an embroidered rumal.

One of the favourite themes of the Chamba embroiderer as of the painter,
were the playful antics of Krishna with Radha and other gopis.
He is shown with her in various poses while
gopis dance for their enjoyment
and
gopas play the conch shells and hold up the lotus flower as a salutation to the God. 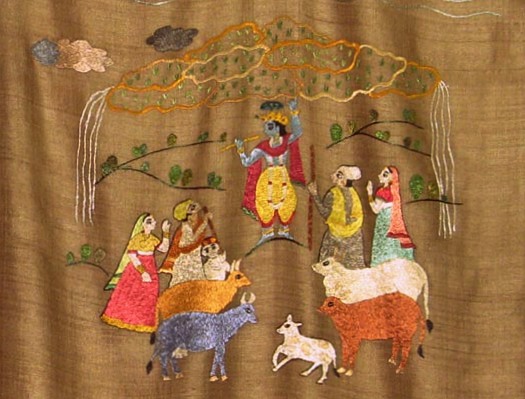 The rasalila in which Krishna dances with the gopis
not as a single person but as a multiple manifestation of himself
so that each gopi finds herself dancing with him individually is also a great favourite. 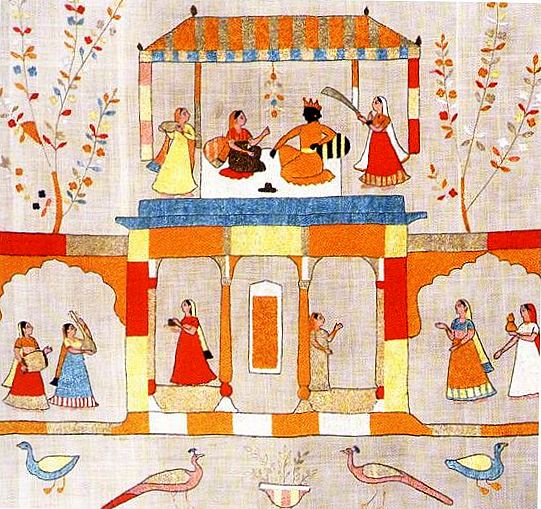 The embroidery is done in soft shades in small double darning stitches
which appear the same on both sides.
Outlines and details are worked in double running stitch and sometimes small patterns
on costumes and other details are shown in coloured darning stitch.
Satin and herringbone stitches, zig­zag and interlaced running stitches
couching for silver gilt wire, long and short and satin stitches,
gross and blanket stitches are also used.
The finest rumals are closer to painting than embroidery
while the less sophisticated ones have the pattern only on one side and
the stitches do not lie so close together.

All these rumals have floral borders on all four sides.
The only exception to this, are the ones that were embroidered in geometric patterns
on the lines of the bagh and phulkari work.
These are either finished off with buttonhole stitch or the geometric pattern
covering the cloth is considered complete in itself and no border is made.

In recent years, artisans have been encouraged to reproduce
earlier masterpieces in order to sustain the craft.
Simultaneously, efforts have also been made to diversify the craft products
to include a wider range of items such as caps, hand fans, blouses and bedspreads.

While reading about this art, I came across this blog
just on Chamba Rumal, You must check out!

Chamba is connected with Pathankot (80km/50miles),
which is connected with Jammu, Delhi, Kolkata and Mumbai.
It may be accessed by road via Shimla, Delhi, Manali, Dharamshala and Jammu.
Gaggal airport, ten kms from Kangra town,on the Pathankot- Manali highway,
operates flight to Delhi, Shimla and Chandigarh.